FANTASY & MEDIEVAL MUSIC FOR OUR TIMES

“Our ears transport us back to the medieval world”

For me, music is not the warm blanket, the quiet cows in the meadow. Nor is it some arcane sophistry, braying from the ivory tower. It is the mythic sword of flames. It is the mournful tolling bell, the impenetrable pitch of the black, blasted abyss. It is the soaring cold peaks and the mystical elven vale. It is lightning and sulphur, elation and sorrow, dark emerald and dungeon stone. 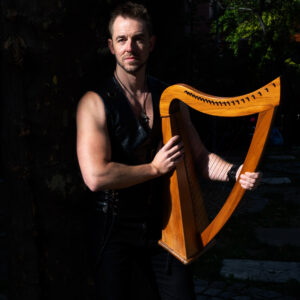 The Lost Codex of Avalon: Pre-Order

A first of its kind medieval and fantasy collaboration between composer and performer David Yardley and some of Australia’s finest musicians from the Sydney Chamber Choir, the Song Company and Pastance.  Inspired by his lifelong immersion in authentic medieval sound, Yardley’s compositions conjure lost music of the mythic isle of Avalon, from Arthurian legend. The album journeys through long-forgotten medieval texts whose original music has not survived, as well as musical settings of evocative fantasy poetry and contemporary Australian works. Many pieces were premiered in London and New York between 2015 and 2019 – examples of live performances are online here and here.

Pre-order now at the early-bird price of $14.95 (USD). Includes the music from the album as a direct download and on CD, as well as album booklet.

White Iris on Thy Bier